in Fundraising
by Chantelle Arneaud

Envestors’  survey report on crowdfunding in the UK revealed over half of all businesses who undertook a crowdfunding campaign within the past three years did not rank raising capital as their key motivator. The findings reflect issues with market perception among growth businesses as to what crowdfunding can do for them. Ultimately, the perceptions in the market are out of sync with the realities and the net effect of this is success rates estimated to be as low as 45-55%.

Crowdfunding and the myth of free marketing

Fifty-two per cent of respondents in the survey of 200 said that ‘brand exposure/customer acquisition/PR was a primary reason they decided to crowdfund with 24% giving it top ranking. However, when asked what they liked about crowdfunding after having run a campaign this drops dramatically with only 12% giving it a rank of number one. This indicates that expectations of ‘free marketing’ and swathes of new customers were not met. 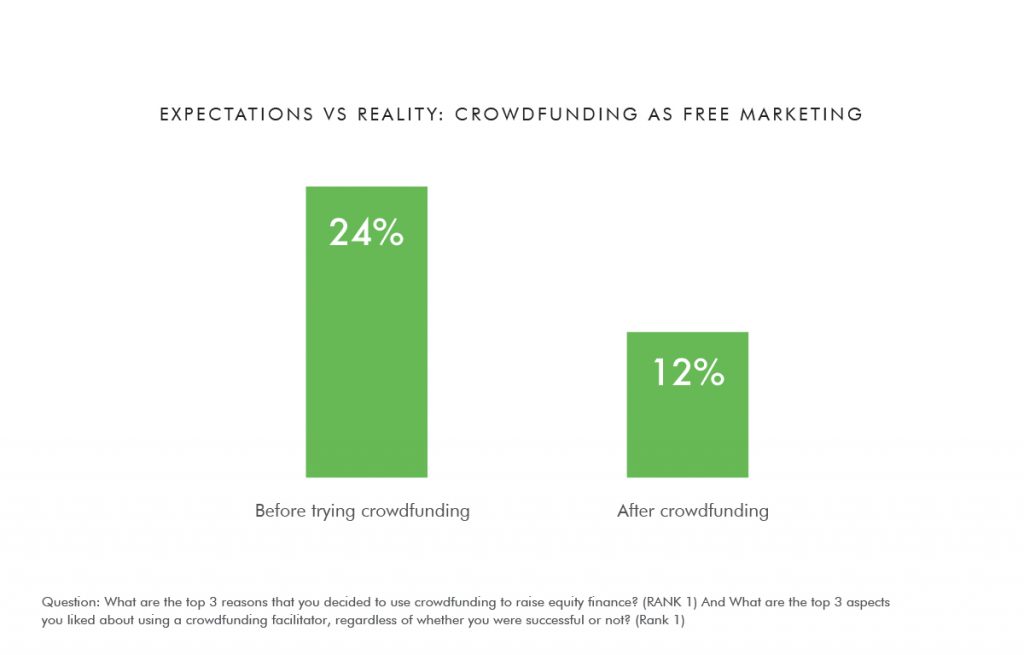 Beyond expectations, brand exposure through a crowdfunding website isn’t free for companies who are paying upfront fees and/or success fees.  ‘The cost of internal resources on running the campaign are significant’, says Scott Haughton, Co-founder of Envestors. ‘On top of that, if you consider that the average raise in this sample was £332,300 and the average success fee in the market is 3 – 7%, cash-strapped companies would be paying £9,969 to over £23,000 in untargeted marketing spend’.

Only 27% of respondents listed access to investors as their primary motive; putting it in 5th position after a perceived high success rate, the ability to provide their community with a stake in the business, the reputation of the crowdfunding site and it being a quick way to raise funds.

The necessity of having your own network

The myth of ‘free marketing’ was only one of many misconceptions uncovered by the survey. The data also clearly shows that start-ups are still unaware of what is required to succeed at crowdfunding.  When asked what companies liked about working with crowdfunding site, the ability to raise money through family and friends, received a low ranking for 60% of respondents. The reality is that most crowdfunding websites require companies to be a percentage funded before they gain access to the site’s investors and ‘go live’, so this is a critical part of every fundraise. It’s clear that this is not well understood in the market.

‘Most companies don’t understand just how difficult it is to raise equity finance’, says Haughton.  ‘The market perception – that you can approach a crowdfunding website and just sit back and watch the investment pour in – persists and we need to educate start-ups that this is not the case. Naturally crowdfunding sites offer many advantages and there are some great success stories; however, the survey data shows us that companies are still not aware at just how much planning and legwork they themselves have to do.’

Despite the challenges, the idea of crowdfunding is here to stay with 71% of those who’d successfully raised funds indicating they would use the method again and 44% of those who didn’t meet with success saying that they would give it another try.

However, companies cited issues with the current model, namely; lack of control over who views business documents (42%), the inability to communicate directly with investors (38%), paying success fees for investment generated independently from my own sources (28%) and investors being charged to invest (28%). 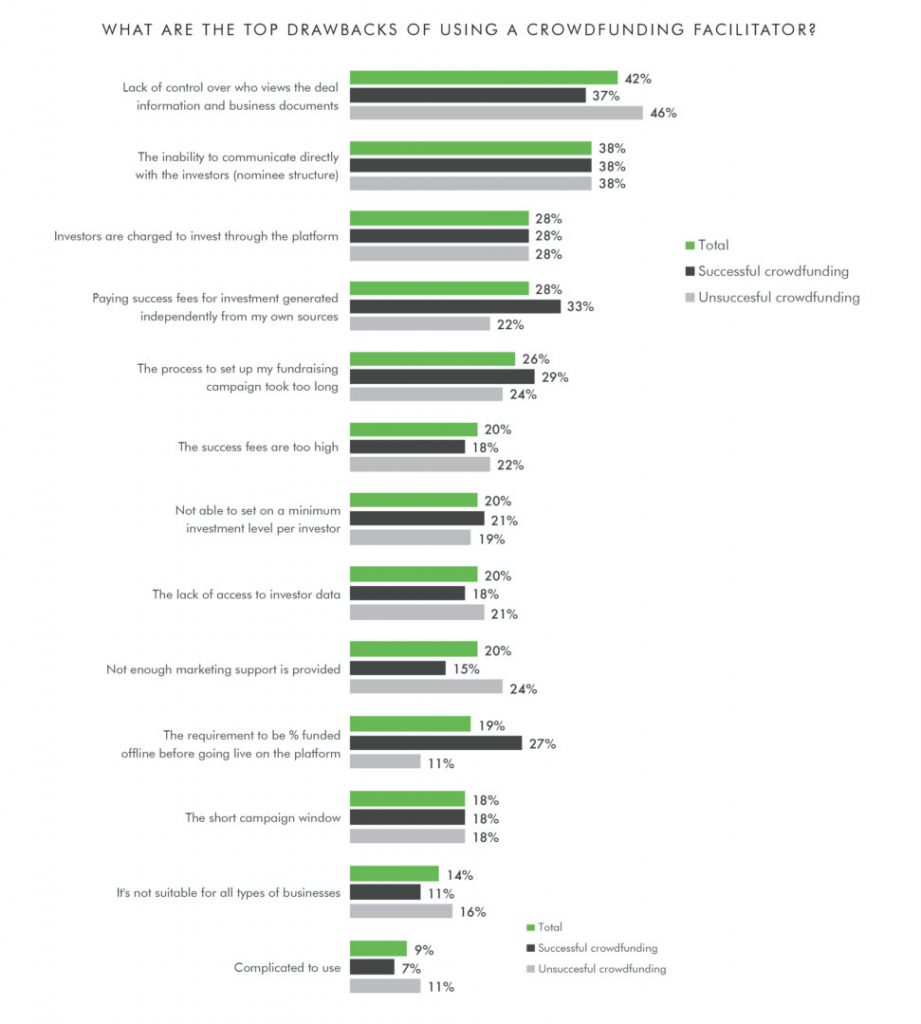 With these frustrations, 80% of successful companies indicated they were ready for new approach – namely an off-the-shelf website that they could brand and control themselves in order to fundraise. 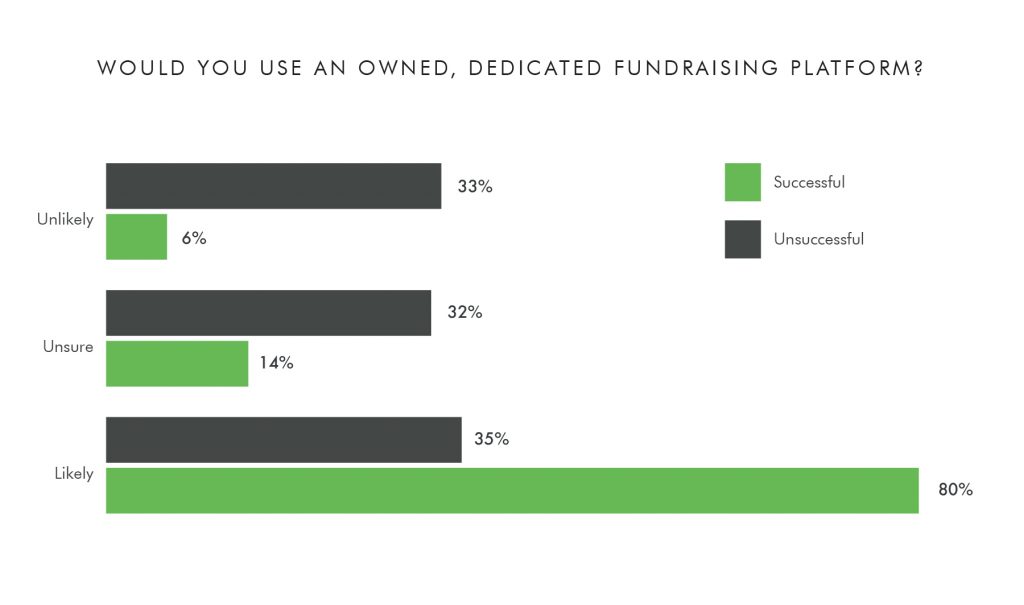 ‘Crowdfunding is a great concept, but it hasn’t evolved since its genesis in 2011’ says Haughton.  ‘Companies have grown in maturity since then and this is exactly why we developed Envestry for Scale-ups, our white-label, FCA regulated fundraising platform that empowers our companies – not the facilitators – to control their fundraise.

The survey was conducted by independent research specialist Coleman Parks on behalf of Envestors in April 2019. Two hundred businesses who had used crowdfunding as a method to raise equity finance within the past three years participated. Click here to view the full report.