in Investing
by Chantelle Arneaud

2020 has been a tumultuous year for growth businesses, but things are looking up.

This year, private UK companies have seen a diminished investment landscape, but one which seemed to be picking up as the year drew to a close. Whilst overall deal value fell in Q1 and Q2 2020, it remained higher in Q3 at £2.7 billion, just a 1% drop compared to Q3 2019.

There has, however, been a shift in direction of funds; investors have been focusing on portfolio companies, as well as more mature companies.

Throughout COVID-19, there has also been a shift in sector preference with investment flowing towards video conferencing services, EdTech, eHealth and ‘community sharing’ businesses. Some sectors rather unsurprisingly, however, are seeing worse damage than others as a result of the pandemic – namely leisure, entertainment and transport. The government stepped up to offer a range of business support schemes in attempts to mitigate these negative impacts, which has undoubtedly helped to soften the impact. 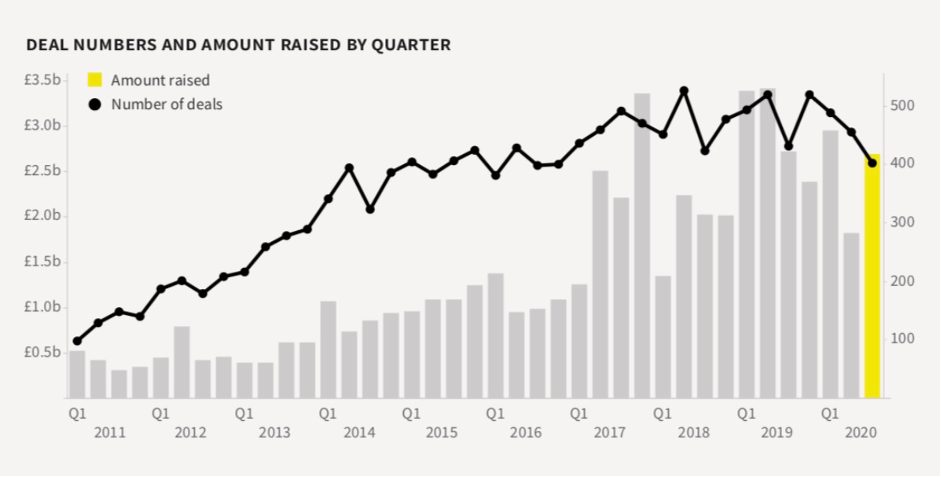 While the number of deals has dropped, the average deal value has risen. Since January 2020, £9.02bn was invested into high growth private UK companies. This trend is likely exaggerated by a few outliers such as Molo Finance who recently raised £266m.

As uncertainty hit the market, investors began favouring later stage deals. A lot of investment activity was focused on follow-on funding for existing portfolio companies, in order to help see them through the impact of COVID-19. On top of that trend, weary of risk, investors shied away from earlier stage deals and backed more mature business.

The number of newly registered businesses remained fairly stable up to and including Q2 2020. In Q3 2020, however, the number fell 32%.

This spells trouble for the next generation of growth businesses. Without the capital they need to move from the concept state, many great ideas will never get off the ground – and that is a shame for the UK who holds a strong international reputation for innovation.

Tracking the impact of COVID-19

There are few sectors that have escaped unscathed by the global pandemic. However, some have been worse affected than others. The obvious being leisure, hospitality, transport operators and retail.

Beauhurst, who track Covid-19 impact in high growth businesses, put eHealth and EdTech as those sectors who have benefitted most with ranked 34% ‘Potentially Positive’, from the pandemic. While the tech sector largely sat in the middle with 54% of companies experiencing a ‘low impact’, only 13% were able to capitalise on the situation. 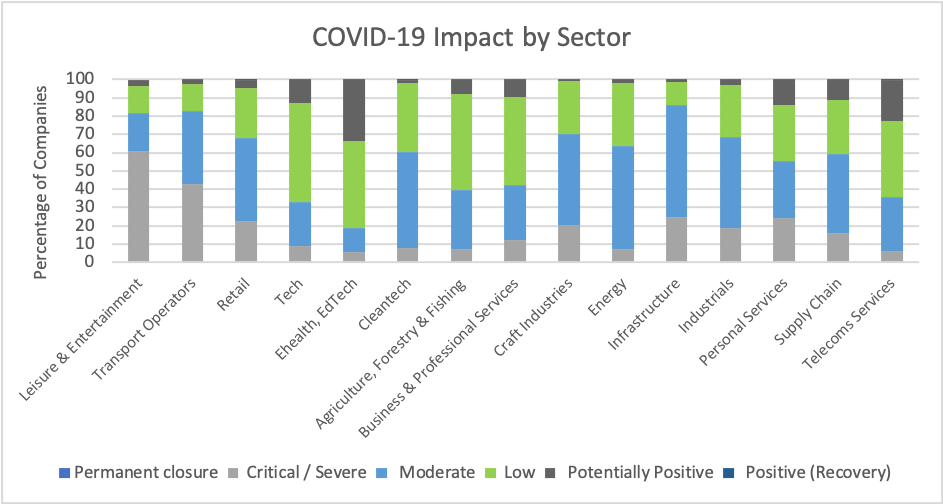 The low number of businesses who have been able to turn the fallout of the pandemic into an opportunity is unsurprising given the pattern of uncertainty we have experienced over the last year. Uncertainty has ebbed and flowed, presenting an inconstant and difficult-to-predict environment for all businesses.

While things looked dire in March, by June the mood began to change with promises of normality by September. This was short-lived with the country returning to uncertainty by mid-October as case numbers rose. While news of the vaccine has brightened the outlook, the challenges of a national rollout and the uncertainty of Brexit will likely continue to fuel feelings of uncertainty for the near future.

The government has rolled out several programmes to help early stage businesses. Designed for growth business, the Future Fund received a lot of attention and applications when it was launched.

While the scheme allows eligible companies to apply for a convertible loan from £125,000 to £5 million, the eligibility criteria ruled it out for many businesses – particularly those seed stage businesses which were already facing hardship in raising investment.

Three requirements were problematic. First, funding had to be matched by private investment. Second, since investment needed to be structured as a Convertible Loan Note (CLN) it was not compatible with the Enterprise Investment Scheme (EIS) which made it less attractive to UK private investors.  Thirdly, the business had to have raised £250,000 within the past five years. This requirement left a large number of entrepreneurs out of the equation.

In addition to this high-profile programme, the government made available a number of grants and loan schemes for businesses, including its Coronavirus Business Interruption Loan Scheme, The Small Business Grant Fund and the Coronavirus Job Retention Scheme (furlough), which have no doubt prolonged the life of many high-potential businesses.

COVID-19 has inevitably had an impact on where investors are choosing to channel their funds. As The Times emphasises, there has been a shift towards investment in healthcare, in part due to the disastrous impact COVID-19 has had on even the most developed nations, highlighting the importance of innovation in healthcare.

Beauhurst has identified four areas which, for private companies, have seen rising investment as a result of the pandemic, the first being video conferencing. Whilst newer services, such as Hopin (an online platform which allows hosting of live events at a large scale), have seen some investment – Hopin has recently received a $2.1 billion valuation, just 8 months since its founding – established companies such as Zoom have remained dominant in the market. eHealth and EdTech have, unsurprisingly, seen increased investment. This rise has been stronger in eHealth, which has seen 11 and 15 deals monitored by Beauhurst in Q2 and Q3 respectively.

Finally, companies that facilitate ‘community sharing’ have seen increased investment – Farmdrop, a business allowing consumers to buy food directly from its source, received £6 million in equity fundraising in June. This trend, according to Beauhurst, likely came as a result of stockpiling at the start of the pandemic, resulting in “calls for people to become more community-minded”.

This year has been a difficult one for private UK businesses, particularly those in leisure and entertainment, retail and transportation operations. Seed stage companies have also seen reduced investment as funds are directed towards both portfolio companies and mature businesses, and the number of new companies registered has fallen in Q3.

With vaccinations due to be rolled out, change is on the horizon – good news for all private businesses. With the end of the tax year approaching, investors will be looking to take advantage of tax savings through the EIS and SEIS schemes, this is likely to result in an uptick in investment as we head into March. However, until vaccination is widespread, unlikely before the third quarter, we can expect to see continued caution by investors and continued hardship for scaling businesses. So, while the sun is rising for private businesses, we have a long wait before the dawn. 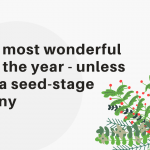 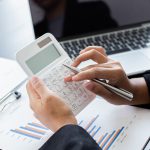